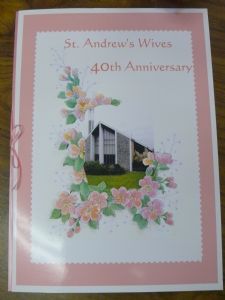 In October 1970, Mrs. Joyce Clayton, the wife of the Minister at that time (Revd. Alan Clayton), and a group of seven young women fo the church got together and formed a monthly evening meeting group which became St. Andrew`s Young Wives.  The Group grew to 75 members in 1975 and has continued to thrive through the years.  St. Peter`s Church joined us in the early days.   On Wednesday afternoons the Wives also met weekly in the Small Hall for a cuppa, a chat and to make items for a stall at the Flower Festival, whilst their Toddlers were looked after by the "grannies" of the church.

As the years progressed the group dropped the "Young" part of the name and became St. Andrew`s Wives Association, as it is known today.

On Sunday 24th. October 2010 they celebrated their 40th. Anniversary.

A special service was held on that day, and we were very pleased to welcome Mrs. Joyce Clayton back to St. Andrew`s to lead the special morning service.  Members of the Wives Group from past and present came back to share in the service.  One of the former Wives Group members, Val Crowe, had managed to bring together again, after 30 years, some members of the Wives Group choir - St. Andrew`s Singers - and they sang "The Stranger of Galilee", "O Holy Jesus" and concluded the service with singing a Gaelic Blessing.

Following the service 76 members and 7 helpers enjoyed a celebratory lunch in the hall.  An exhibition of photos and items was displayed in the Small Hall and this evoked many memories of times and events during their 40 years.

(then by clicking on the thumbnail photos you will find a selection of sizes to enlarge them to).