During October 2012, we had a very inspiring weekend with the Lay Witness Team, and here, with permission is their report of the Weekend, which appeared in their magazine Honeycomb after the event. 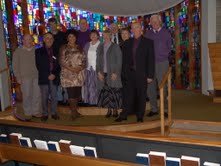 From the outset, we knew there would be few problems in planning the Sheringham Weekend held 19-21 October. Indeed, it ended up being one of the best we have experienced in 26 years of leading Lay Witness Weekends.

The folk at St. Andrew’s were accustomed to organising big events, their annual flower festival attracting bus loads of visitors. At our first planning visit there were about 20 people to greet us, ready and willing to ensure that the arrangements for the SGL Weekend were the best they could be, and so they were. We only had to undertake one further visit, mainly to talk at a Sunday morning service to encourage church members to attend the Weekend.

Our main concern was would St Andrew’s Church as a whole come along and engage with the lay witness team and the challenges we were to lay before them? This became a focus for the LWM prayer team with whom we had regular contact. However, by the time we reached the Sunday Morning Service at the Weekend, it was clear they had! A wooden cross at the front of the church told the story. It was absolutely full of stones brought forward and placed there by St Andrew’s members (and others) representing a variety of responses during what was described to us as “A wonderful Weekend in the life of St Andrew’s Methodist Church.” What follows are just a few of other comments that we have received from Sheringham following the SGL Weekend:

“From the Friday evening when our Lay Witness Team arrived there was a sense of excited anticipation as we shared that first meal. We were not disappointed: as they spoke of their spiritual experiences one by one over the weekend we too found ourselves talking about ours. The mutual sharing and stirring up of God’s love amongst us, we feel, will strengthen our church and its outreach into Sheringham and beyond. We thank everyone of them for coming: our church was truly blessed”      Kim & Ross Wordie

“The highlights of the SGL Weekend for us were the testimonies of the team members and the Saturday morning house groups that we attended. This showed us what we would hope, that our shared love of Jesus will move among us and overflow into Sheringham. It was a memorable, wonderful weekend”     Audrey & John O’Neil

Other snippets included “The weekend was a time of renewal for me”, “A whole amazing experience” and “Thank you for a joyous weekend”

What really impressed us was St. Andrew’s determination to see the SGL Weekend as part of the ongoing life of the church and to build on the positives from the Weekend. We were told that the Sunday Evening Service to bring the weekend to a close, was a wonderful celebration with a dozen people coming forward to say what the Weekend had done for them and how they had felt God at work in all that happened.

A summary of completed response cards has shown many having made deeper commitments in their Christian faith with a large number interested in joining house fellowship and prayer groups. The Church also intends to use the Movement’s SGL Follow-on Course “Exploring God’s Love” during Lent 2013.

Looking back for us, this will be a LWM Weekend to remember for many reasons. We were blessed by a team game for everything thrown at them, including a few called upon to wear strange costumes for a sketch at the Sunday Morning Service titled “Are you wearing the right shoes”. This was written by team member Angie Springhall, designed to gently challenge folk in their individual Christian service and the work they do. Also, we had a well organised Church and a set of lovely people who were prepared to engage with us and make themselves vulnerable, trusting us in where they were being led. Above all, a prayer team that responded to all that was asked of them and surrounded the whole event in love and prayer.

“The Weekend has been inspiring. Many people are undergoing a reassessment of their walk with God! A God driven weekend which has challenged and changed not only those who participated but a whole group of churches.”

But it can’t be the final word  - this must go to Maggie and Peter Roffe who wrote to us afterwards to say what a wonderful and special time it had been for them.

The team had been told that someone called Peter was expected to attend the weekend who was suffering from terminal cancer and that he might have difficulty eating and particularly talking in groups. Peter had undergone numerous operations to alleviate his suffering but had declined further invasive treatments to retain a quality of life whatever time was left for him. What we didn’t know was that, 2 days before the Sheringham Weekend, Peter had undergone another MRI and CAT scan followed by an endoscopy and had been told that a new secondary cancer had been detected on his vocal chord. Things certainly weren’t looking good for Peter but still he came.

Then, in a Saturday morning home group led by Angie Springhall, Peter let out a cry towards the end saying he felt he had been touched by the Holy Spirit moving through him. After the Sunday Morning Service one of our team members (Robin McEwen) prayed with Peter and after lunch we left for home. What followed was amazing!

On the following Tuesday, Peter returned to the hospital for further tests and scans and was told that the cancer could no longer be seen. Maggie, his wife, said that Peter left the hospital saying “Thank you Lord – Thank you Jesus”. The following days he couldn’t stop telling folk about the amazing thing that had happened to him. When we rang a week later the family were with him and he was eating and talking normally. The consultant has subsequently said that he doesn’t want to see Peter again. His primary cancer is also on hold. How amazing is that!

Nobody, including Peter, knows what the future holds but there can be no denying that God’s hand and healing was on St Andrew’s Methodist Church that weekend.

Wow, what a weekend it really turned out to be – How great is our God!!