THE 200th ANNIVERSARY OF PRIMITIVE METHODISM 2007

On the Sunday afternoon members of the church along with friends from the Circuit, gathered at the site of the old Station Road chapel, and after a short prayer, processed (led by the local Salvation Army Band) to St. Andrew`s Methodist church for an Open Air Camp Style Meeting on the lawn in front of the church. 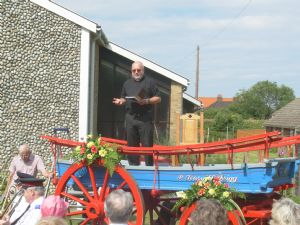 Camp Meetings were a regular feature of Primitive Methodism and part of its origin with preachers (several of them in Sheringham being fishermen), using wagons or carts to preach from, and this Sunday was no exception.  St. Andrew`s Minister, Revd. David East led the service from such a wagon.  Around 100 people joined in the event and music was provided by the Salvation Army Band, with Major Adrian Maddern doing the Bible Readings.   A duet of "Jesus, Saviour pilot me" was sung by Sylvia and Eric Forshaw.

Following the service a
Faith Tea was 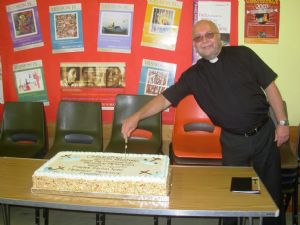 provided
in the church hall, with a celebratory cake, cut by
David East.

An exhibition of photos, cuttings and memorabilia from the Station Road church provided much interest and memories for many people, and this was open again for viewing on the Monday.  Included in this exhibition was the original jacket worn by one of the Fishermen Evangelists, John (Teapot) West who along with Willie Long (the well known fisherman evangelist), went on Missions to London, Grimsby and many other places in the late 1800`s and early 1900`s.  Also on display was the pulpit chair from the former Station Road Primitive chapel.  A booklet of the history had also been produced and copies of these are available (£2 plus 50p postage & packing)