The History of Weybourne Methodist Chapel 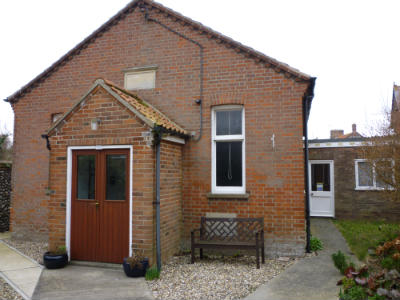 The first recorded presence of a Methodist Society in the village was circa 1830 according to the Holt Weslyan Circuit list of churches.

The 1851 census of religious worship in Norfolk, records both Weslyan and Primitive Methodist societies in Weybourne.

In 1854 it is recorded that the Primitive Methodists had a church, probably a converted cottage, in Chapel Yard, just off the street. 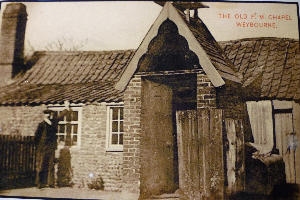 By the turn of the century the old church was inadequate for the growing congregation, land and cottages in Church street were purchased at an auction on 10th. July 1901 at the Feathers hotel in Holt.

"Lot 1" an excellent brick, stone and tile dwelling known as "the rest" used as a temperance refreshment coffee house, also four dwelling houses with adjoining wash and coal houses together with a productive adjoining garden.  A well of excellent drinking water and a constant supply of spring water running through the property

The Society purchased the land and dwellings for £450 from a Fannie Louisa Bird on the 16th. October 1901 the deeds were drawn up and finalised and witnessed on 27th. February 1906 by

The plans for a 130 seater church and adjoining school hall were drawn September 1901, but perhaps because of the heavy financial burden the society could not proceed with the grand plan.  So in circa 1902 further plans for a school hall in a different position were drawn, building proceeded and the two stones for the new school hall were laid on 5th. April 1904 by the MP for North Norfolk, Sir W. B. Curdon and Mrs. W. M. Burton.   The new chapel cost £200.  No further devolopment took place an 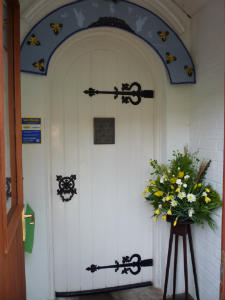 d the planned cottages demolition and the 130 seater church building never took place.  The last of the cottages was sold on 23rd. July 1968 and the proceeds went towards a new porch, vestry, kitchen and washrooms.

In October 1976 severe rain storms caused extensive flooding in the village, and the chapel was one of many building affected, with a depth of 18 inches of flood water.  The long term effect of this necessitated the complete refurbishment of the building.  £10,000 was raised in 18 months to complete the task in 1986

An interesting board of the history, along with some photos is displayed at the church: It includes photos of some of those people mentioned above. 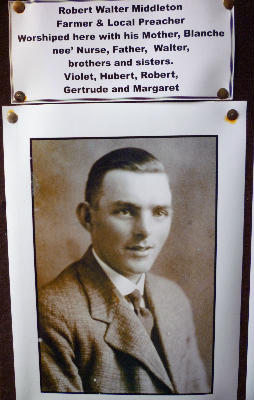 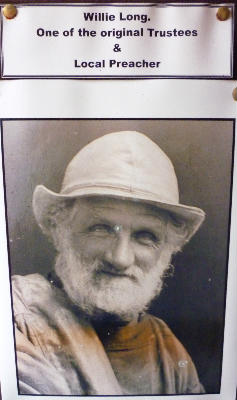 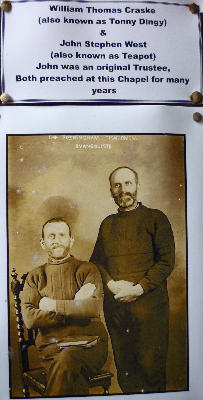 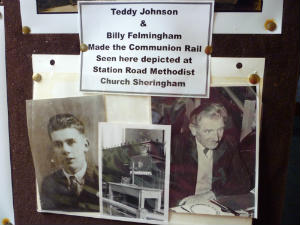 On the board there is also an interesting article entitled
Fishing & Preaching
(by W.H. Middleton  (Circa 1946) )
which refers to some of the Trustees of the Chapel

"Most of my boyhood memories centre on the Methodist Chapel which stands in Station Road, Sheringham.  In those days there was a fine band of fishermen who attended the services.  And often took their place in the pulpit to preach with such power and conviction.  They were the finest men I have ever known.  there was something reminiscent of the first disciples  of Jesus in their character and occupation.  Like Peter, Andrew, James and John, they were men of the sea and often braved its storms and its dangers.

These men were not polished in speech.  They had rich Norfolk brogue and their preaching abounded with the idioms of their trade but like John Bunyan the tinker of Bedford their minds were stored with the majestic prose of the English Bible.  They were simple men with natural dignity and could command respect and interst of any audience.  I have often listend spelbound as they told of their experiences when westling a living from the sea

James Middleton was a man short in stature, but great in eloquence.  His preaching was often punctuated with bursts of song.  Some of the hymns he sang were, I am sure, of his own creating, and it is a great pity that they were not recorded.  One verse went something like this:

You ask my occupation?
A fisherman, say I
A fisherman for Jesus!
Sometimes to preach I try.

James Middleton had a rare sense of humour, which he would use with great effect to drive home any point in his sermon.

Another singer was Tony Craske.  He was a big man with a voice rich and resonant.  He loved to sing hymns of the sea such as, 'Throw out the lifeline'; 'The gospel ship along is sailing' and 'From sinking sands He lifted me'.  One of his favourites was

'Take off the old coat, put on the new
For Christ hath a garment ready for your'

Often when he warmed to his work Tony would suit the action to the w and strip off his jacket and reveal his blue fisherman`s jersey beneath!  Not only could he sing to an audience, but also he had the power to make people sing with him.  His loud appeal "Now, altogether" would move his hearers to join with him in the joy of song.

Often I have accompanied Tony Craske in his pony and trap to the village chapels in the district to Gresham, Beckham, Kelling and Weybourne and have been thrilled to see how joyously the contry folk have received him as an old friend.

On these excursions there was alsys the pleasant ritual of feeding the pony and lighting lanterns before we came home.  Both James and Tony have now reached the port of heaven.  Like Saul and Jonathan they "were lovely and pleasant in their lives and in death they are not divided"

I have had the opportunity in past years to go to sea with some of these men in their little crab boats.  They loved their work, for the sea was their home.  To my young eyes the enthralling operation of hauling the crab pots into the boat and removing the crabs was an occupation to be desired about all others.   I never masterd the technical terms of the trade.  To this day I am hazy about th meaning of "swummers", "moorings"

and "first ebb" and "single ebb". It was a mystery to me how these men knew to find their own crab pots for they never hauled anyone else`s crabs.

Sometimes, when storms came the lifeboat would be called to hellp a ship in distress.  How eagerly the fishermen would take their places and be ready to face the dangers of the sea to rescue those in peril.

But to these Methodists the greatest thing was their preaching.
Willie Long, was the finest preacher I have ever heard.  he was a born orator with a fine sense of the dramatic.  There are Methodist Communities in Norfolk, which owe their very existence to his pioneer evangelism.  Of such men is the kingdom of Heaven.  Honest, gentle, upright an

d stron in their convictions.  We shall not see their like again.....

Both John and William were original Trustees and would have preached at Weybourne.

[I acknowledge thanks to Malcolm Felmingham, who had researched
and written this history of the Weybourne Methodist Church] 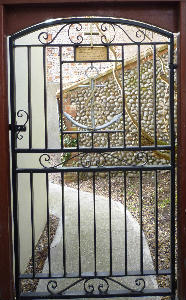 The gate at the entrance of the path to the Chapel was erected in memory of Malcolm.