Several items in the Church are worth mentioning:- 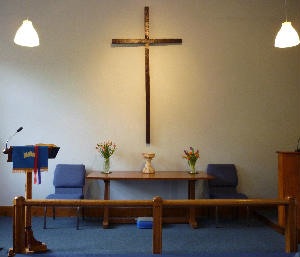 The Clock and Altar Table were purchased for the opening in 1904.

The Piano was given by Walter Freeman a local peacher of Sheringham
The Piano Stool was carved by William Robert Tuck in 1904, he was born in Weybourne and was also a local preacher. The stool was presented by his daughter Gertrude Felmingham in 1989.
Hymns & Psalms Hymbooks were presented in memory of Evelyn Thurtle (nee Woodhouse) in 1983
The Garden Seat was given by members to commemorate the lives of Bob Middleton, Gordon Fovargue and Bill Rose in 1993. 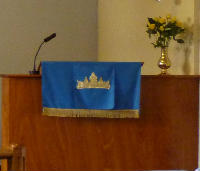 For the 80th. Anniversary of the Chapel an new pulpit cloth was made and presented by Joan Rose.
A New Internation Pulpit Bible was presented in memory of Laura Holland in 1996 and the Notice-board, Sign and Lectern were made by Charlie Woodrow of Sheringham.
The Organ that "Plays itself" was a generous anonymous gift in 2000.

The Monument - "Faith, Hope and Love" was also an anonymous gift commemorating 100 years of Christian Witness in this church, in 2005.

In 2005 the majority of the church and vestry chairs were deposed of at £1 each, and the piano was also disposed of. Sixty Designer stacker chairs were purchased in September 2005 at a cost of £2,564.92, a generous gift of £1,000 was received from the Weybourne Community Fund and the rest was fund raised by the church members.

In January 2006 ten yards of fabric was purchased to make cushions and a Communion rail kneeler. The kneeler was a gift from the `Friendship Club` who meet at the church regularly.